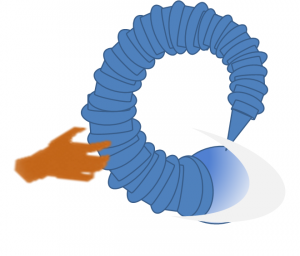 The thought behind LivelyForm is investigating if the interaction with a moving object, such as LivelyForm, can promote the child’s own movement. The construct is a worm-like elongated form that can bend (curl) and stretch.

Movement is produced by a 24V DC-motor pulling a cord connected to the other end of the form. The skeleton of LivelyForm is a curled plastic sheet which acts as a spring, trying to pull the form to a curled state. There are three Arduino boards inside LivelyForm design. The motor is connected to an Arduino master board. A capacitive sensor connected to an Arduino slave board detects if the LivelyForm is being touched. Another slave Arduino board drives an array of LEDs. The boards communicate via I2C protocol. 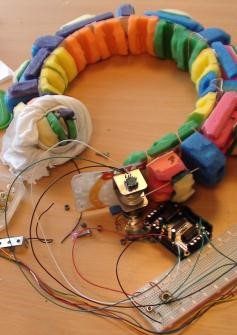 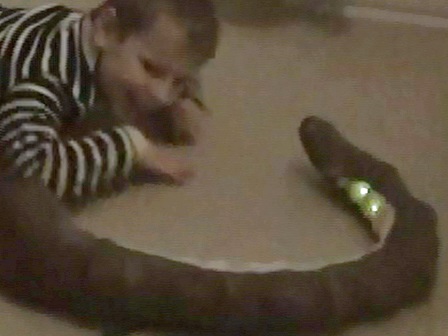 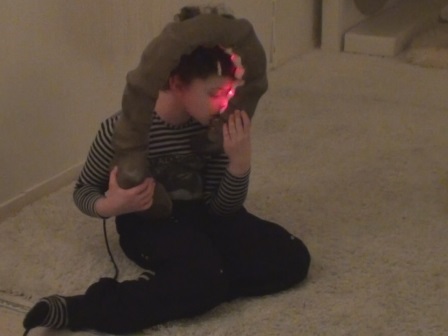 If touched, LivelyForm stretches and light patterns run along its inner side depending on its current “openness” and the time elapsed since the touch started. If not touched, the LivelyForm returns to a curled position. 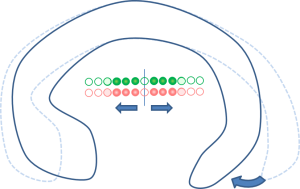 It was observed that the children tend to continuously grab the LivelyForm rather than alternating between touch and look, a single sensor did not make sense. A modified version was developed, which had five different CapSense sections that let the LivelyForm react to different touch patterns. If a single section was touched for a short time period of time, then lively form reacted and started opening. If  it was kept being touched in the same section after a short time, then it stopped moving and stayed in an ”alert” state, where only light patterns changed, but there were no changes in movement. If LivelyForm was released for over a certain time, then it started closing. These invited continous changes in touch patterns for LivelyForm to react in movement.

LivelyForm software can be found here

LivelyForm is a bit tricky to get started with. In order to operate correctly, the pinout from the elements to the arduino board is summerized in the following file:

A quick start guide has is available here: